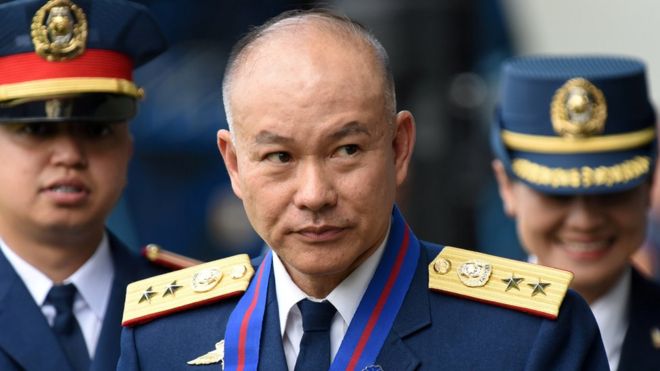 The former head of the Philippines national police force is facing a criminal complaint in relation to the alleged resale of confiscated drugs.

In his role he led President Rodrigo Duterte’s war on drugs.

Gen Albayalde denies the charges, but said he welcomed the police investigation so that he could be given “due process”.

A Senate inquiry, held this month, recommended that Gen Albayalde and 13 police officers under his command be charged with drug and graft charges in relation to the alleged resale of confiscated narcotics in 2013.

The criminal complaint was filed on Monday by the Philippine National Police-Criminal Investigation and Detection Group (PNP-CIDG), the body tasked with investigating crimes committed by police.

The Department of Justice will now decide whether they want to prosecute the former police chief and the 13 others based on the charges filed.

Serving in his role since 2018, Gen Albayalde was the second national police chief to enforce the government’s controversial crackdown on drugs.

President Rodrigo Duterte launched the anti-narcotics campaign in 2016, to deal with a rampant drug problem in the country.

Human rights groups allege many of the killings in the operations are summary executions, carried out without giving the suspects a chance to defend themselves in a court of law.

Early this morning my phone buzzed with another email alert: “Drug suspect dead after allegedly fighting police,” read the message.

Over the last few months, these alerts about drug war killings have been regularly appearing in my inbox.

Despite the Philippines now being the subject of a UN Human Rights investigation, the government continues to pursue its controversial policy and the police have always maintained that the killings are the result of self-defence.

Supporters of President Rodrigo Duterte point to recent opinion polls and mid-term election results, overwhelmingly in favour of Mr Duterte, to show the public are behind his anti-drug campaign.

Today, Mr Albayalde denied the charges against him, but said he welcomed the police complaint so that he could be given “due process” to clear his name.

Critics on social media pointed out that that is what many killed in the drug war were never afforded.

In July, the UN Human Rights Council voted to set up an investigation into alleged crimes committed during the Philippine government’s war on drugs.

The resolution, which passed by a narrow margin, mandated a comprehensive written report into the human rights situation in the country.

It will focus on reports of extrajudicial killings, arbitrary arrests and enforced disappearances.

The Philippine government opposed the resolution and branded it a “travesty”.